If you’re an Ocean City booster – and who isn’t? – you can add miniature golf to the resort’s long list of national bragging rights.

Aaron Kaminski, 28, who has been playing mini-golf since he was 3, and who is the president of a local mini-golf “tour,” recently earned a spot on the hit ABC “extreme mini-golf” reality show “Holey Moley.”

With the appearance came a chance to putt for the $250,000 grand prize.

Unlike conventional miniature golf, Holey Moley contestants navigate a golf obstacle course featuring trap doors, windmill “blades” that can knock a player into the water hazards and a slippery hill of ice, just to name a few of the features.

“It’s really not a miniature golf competition. It’s a show that combines slapstick comedy, and competition that uses mini-golf as a key element,” said Kaminski.

Holey Moley consists of head-to-head sudden death matches pitting contestants who either win and advance or lose and go home. Kaminski will appear on the episode scheduled for Thursday, Aug. 6, in the coveted primetime 8 p.m. time slot.

Although sworn to secrecy about the outcome of the match and even describing the hole or holes he will compete on, Kaminski made one thing clear: “What I can tell you is that I absolutely make a fool of myself,” he said, laughing.

If that’s not enough to impress, Aaron isn’t the first local mini-golf pro to appear on Holey Moley. Evan Rundgren, 29, appeared on last year’s season and came within a half-inch of sinking a putt for $25,000 under its old format. 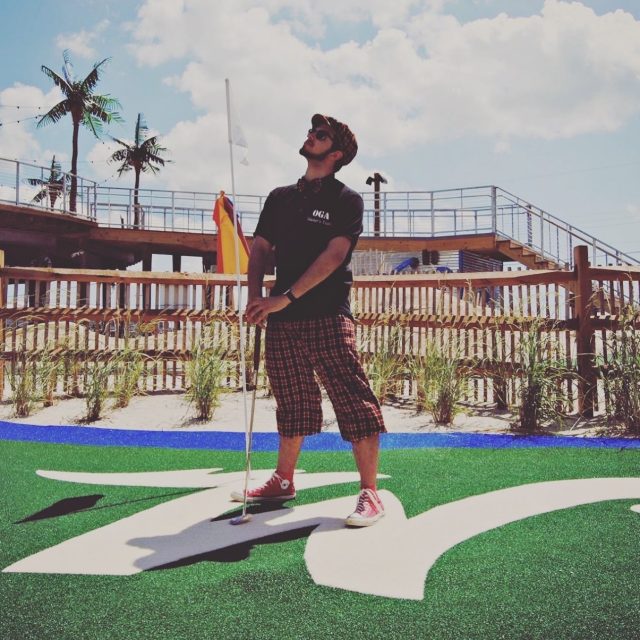 Not content with lightning striking twice, “Next year we have to make it three in a row, by getting Rudy on the show,” said Aaron, referencing another Ocean City mini-golf ace, 37-year-old Rudy Reel.

The trio are among the top performers on the O Street Mini-Golf Association (OGA), which conducts its own tour of area miniature golf layouts and serves as a training ground for national tournaments, many with significant prize money at stake.

Just as in conventional golf’s PGA, a fast-growing U.S. Pro Mini Golf Association oversees many of the tourneys, including the “U.S. Open,” which rotates the location of its championship, and the “Masters,” always held at Myrtle Beach, South Carolina.

While all of that is exciting, the success of “Holey Moley” has been a phenomenon, elevating the sport to a status far beyond its previous popularity.

The first episode of the show’s second season drew 4.4 million viewers, according to the Neilson ratings.

“I think the ratings were further boosted by the COVID-19 pandemic and so many people being in quarantine,” said Kaminski, the furloughed entertainment manager of Atlantic City’s Hard Rock Casino. “At the time of the first episode, Holey Moley was about the only live sport taking place in the country that was nationally televised.”

The campy series is co-hosted by comedian Rob Riggle, who does color commentary, and veteran ESPN announcer Joe Tessitore handles the play-by-play. Adding to the fun, the pair wear the bright yellow ABC Sports blazers worn in the 1970s by Howard Cosell and the Monday Night Football announcing crew.

Last year, Kaminski, Reel and some family members and friends accompanied Rundgren, who is the nephew of rock n’ roll legend Todd Rundgren, to California for the taping.

In a running gag for the show, Rundgren’s “entourage” turned on him and pretended to cheer for his opponent. But in reality, nothing could be further from the truth.

“We were hoping he would win, and he came about as close as you can without doing so,” Aaron related.

Rundgren’s near-winner was on the so-called “Mount Holey Moley” hole. Contestants had to stroke the ball up the side of a volcano, zipline over a pool and land on a floating dock to reach the green.

Finding mini-golf scratched the itch to compete for Kaminski, a former champion swimmer at St. Augustine Prep and a Division 1 competitor at Drexel University.

He is president of the OGA, whose events helped prepare him for the pressure of national TV, said Kaminski.

A recent OGA tourney at a Boardwalk course drew 33 entrants, he said.

The group has its own Facebook page listing upcoming tour events, posts of trick shots and mini-golf news, and there is a YouTube channel rating area courses and taking a not-so-serious look at their oh-so-serious matches.

Kaminski spoke to a reporter Saturday from the road, where he was returning from Baltimore after placing third in a U.S. Pro Mini Golf Association tourney.

His all-time low score for an 18-hole course is 28, a feat he achieved three times last year, locally at Seaport Village Mini Golf, then at a course in Myrtle Beach and finally at Golden Galleon’s Starboard course, his best overall round with 11 holes-in-one.

He said he’ll host a small watch party with social distancing practices in effect when his episode airs.

“Mini-golf is great because anyone can practice and be good at it,” he said. “Old or young, male or female, in shape or out of shape, it doesn’t matter. Anyone can excel at our sport and everyone can have fun. That’s the most important thing.”