The Hermits Athletics Hall of Fame recognizes the accomplishments and contributions of some of its finest scholar-athletes, coaches, teams, and the famous Richland Rowdies.  Today, we proudly unveil the Class of 2023 Hall of Fame Inductees with the help of the Hermits Broadcasting Channel and the Hall of Fame Committee led by Event Chair, David Catalana ’82 P’13.

We invite you to join us on Saturday, March 25, 2023, as the school will honor these proud representatives of the Hermits Brotherhood who excelled in their sports or roles and brought honor, recognition, distinction, and excellence to St. Augustine Prep.   This recognition maintains the school’s spirit, pride, and sense of community and celebrates the great tradition of Hermits Athletics.

Purchase tickets for the 2023 Hermits Athletics Hall of Fame Dinner Highlights from the 2022 Hermits Athletics Hall of Fame Dinner

RICHLAND, NJ, March 19, 2022 – The Hermits Athletics Department and the St. Augustine Prep community inducted the Hall of Fame Class of 2022 during a ceremony held this evening in the Rodio Gymnasium (A gymnasium visually transformed by NMR Events and the Meduri Family P’15’17’21).  Enshrined into the school’s Hall of Fame were 10 individual honorees, the Richland Rowdies, and the magical untied and undefeated 2007 state champion Hermits Hockey team.  Over 150 guests proudly joined this year’s inductees, with several participating in the evening via video messages honoring their Hermit Brothers entering St. Augustine immortality.

Among those addressing the crowd was Head of School, Fr. Robert J. Murray, OSA who recognized the accomplishments and unselfish contributions of this year’s honorees.  The emotion in the room was captured by Athletic Director, Michael Rizzo ’86, who shared a powerful update on the current state of Hermits Athletics.  He attributed the school’s current success to the hard work and sacrifices made by many of the people who were in attendance.  In a similar light, as shared by the Prep’s co-founder who also served, amongst several roles, as the school’s first athletic director, Mr. Anthony Spina (video below) credited the support of the school administration, students, and their families who have worked to strongly represent the school’s athletic endeavors.

Surrounded by teammates, classmates, administrators, teachers, and coaches, the newest members of the Hermits Hall of Fame proudly accepted their honor and reveled in the evening with family and friends.  Led by Master of Ceremonies, David Catalana ’82 P’13, each inductee took the stage and shared how the strength of the Hermit Brotherhood has continued to impact their lives well beyond their time at their alma mater.  They also credited their success in the athletic arena to the values instilled in them by the school as well as the support of past administrators (including former School President, Fr. Paul Galetto ’74 who was in attendance!) their fellow classmates, most specifically the Richland Rowdies.

The evening was a rousing success and the vision of the Hermits Athletics Hall of Fame Committee in bringing this wonderful event back to Richland blossomed into a wonderful reality.  The school is already eager to host everyone again at the 2023 Hall of Fame dinner!

Scroll through the evening’s photo gallery and learn more about this year’s inductees through bios included below: 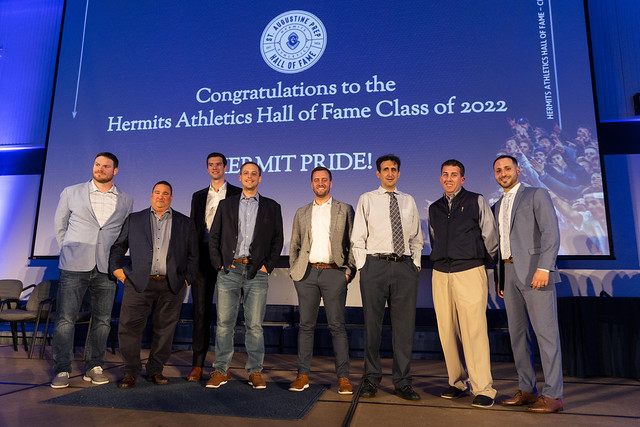 Justin Abbey ’93 (video includes Justin Abbey’s acceptance speech)
Honored by the South Jersey Soccer Coaches Association as an All-South Jersey selection three times, including a first-team honor in his senior season. Justin racked up 99 goals and 132 assists for the two-time state champion Hermits. He went on to play at Rowan where he led the team in scoring his first three seasons and was named to the NCAA All-Region team twice. The Hermits Soccer star finished as the Profs’ all-time assist leader with 45. Currently, Justin serves as an assistant coach with the Rowan men’s soccer team.

Dave Orlandini ’84 (video includes David Orlandini’s acceptance speech)
The first member of the Hermits basketball 1,000 point club.  David scored 1,514 points for the Hermits, all without the three-point line (which would be added at the high school level for 1987-88). He then held the school record for points in a career until 1997 (eclipsed by Michael Kouser ’97). “Davey O” averaged 10.2 points per game during his career at Princeton; his 51.3% career shooting percentage behind the arc is still an Ivy League career record.  He also shot 54.5% from three in 1987-88, also an Ivy League record.

Dan Fabbri ’85
Danny helped guide the Hermits Wrestling program to back-to-back team State Championships (the first two state championships in program history, and in just the third and fourth years of varsity competition for the school). Individually, he was a two-time District 32 Champion in 1984 and 1985.

Ryan Owens ’04
A two-time all-conference golfer who led the Hermits to multiple CAL Championships. During his 4 years, the Hermits Golf program was undefeated. Ryan is a well-respected professional in the golf community serving as the assistant golf pro at Greate Bay Golf Club.

Christian Sprang ’05
The two-time Press Boys Swimmer of the Year won the MOC 500 freestyle in 4:36.59 in 2004 and was second in the same race in 2008 with a better time (4:33.76). Christian led the Hermits to the state Non-Public B title in 2004 and the A title the following year. He and his brother Ryan, who coached the Hermits, were on the ground floor of establishing a swimming dynasty at St. Augustine Prep which resulted in multiple State championships. Following graduation, he went on to a successful career in the Big Ten Conference swimming for the University of Michigan.

Neil McPeak ’05
Neil led the 2005 Hermits to its first-ever Varsity 8 State Championship. In 2005, he was named to the United States National team winning the Junior World Championship in Germany in the summer following his graduation from the Prep.  His collegiate career brought him to the University of Pennsylvania, captaining the varsity eight in 2008 and 2009.

Sean Olson ’05
A complete player who earned first-team all CAL in 2003, 04, and 2005, Sean was named first-team All-South Jersey his senior year where he led the team to the CAL championship. He went on to play at Rider University where he maintained a .319 career batting average. He was a three-time First Team All-MAAC and All-New Jersey pick. As a senior, he was named Second Team All-East and New Jersey Division I Player of the Year, while also earning MAAC All-Tournament Team recognition.  Sean is also slated to be entered into the Rider Hall of Fame later this spring. Interesting Fact: Sean’s 100th Hit at the Prep and his 100th collegiate hit came by way of home runs.

Mark Sivieri ’91
Arguably the best distance runner in the history of St. Augustine Prep, Mark qualified for the cross country Meet of Champions in 1989, where he ran a personal-best 16.45. Later that academic year, he would win the 1600-meter race at the spring track Meet of Champions with a time of 4:15.1. He would continue his running career at Georgetown University, where, in 1994, he became one of the few New Jersey natives to run a sub-4-minute mile.

George Gennaoui ’07
A four-time All-South Jersey selection, 4 time Press First team, including Player of the Year in 2007, and CAL First Team All-Star. George was the first player at Saint Augustine Prep to reach 100 career wins, finishing with 116 wins. Named to the All-State Non-Public team four straight years. Captain of the tennis team his junior and senior year and led his 2007 team to the Prep’s first-ever State Championship in tennis.

Bill Hambrecht ’00
Billy was named first-team CAL throughout his four seasons at the Prep and received a full scholarship to Rutgers University. His dedication to the Prep Football program is often mentioned as he remained loyal to the school and the program despite some lean seasons.  His immense talent on the field made him a sought-after player in South Jersey but he stayed true to the brotherhood and was an unmatched example of leadership during this time at St. Augustine Prep.  He finished his decorated college career as an All Atlantic 10 Academic Football team at Hofstra.

2007 Ice Hockey Team
Went 23-0-0 in capturing the school’s first state championship in ice hockey. In doing so, they became the first school in state history to win a state championship going unbeaten and untied for the season. Entering the tournament seeded 5th, they defeated Gordon Conference schools Seton Hall Prep (4-2), Delbarton (3-2 OT), and St. Peter’s Prep (3-1) to win the title. Their success led to St. Augustine Prep being invited to join the Gordon Conference for 2007-08. This team was also inducted into the New Jersey High School Hockey Hall of fame in 2018.

Richland Rowdies
The Rowdies have a long and illustrious history that predates their official naming in 2006. For decades, St. Augustine Prep has had a student section that consistently cheered on the basketball team, making the Anthony J. Spina gymnasium sound like a miniature Palestra. The Rowdies have since branched out to support many varsity sports, giving the Hermits one of the best home-field advantages in the state.

Relive the event by viewing the full recording below courtesy of the HBC!